I’ve been waiting to test Ethanol Free Gasoline (E0) for eons, but I could never find a local service station that carries it. Blame it on the lawmakers. As it turns out, New Jersey state law stipulates that all of the gas sold here must contain ten percent ethanol. Thankfully, ethanol-free gas is sold on the other side of the Delaware River, fifty odd miles from home. I took Slambo for a ride today, to fill up with E0 for the first time. I intend to test it over a number of tanks. 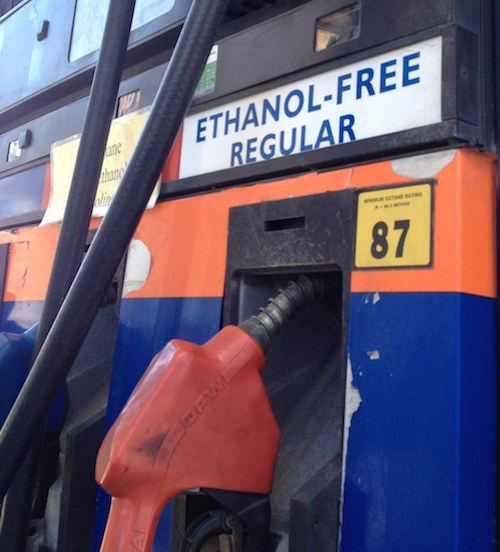 Proponents of ethanol-free gas claim a significant jump in fuel economy. Just how much is the big question. 100 percent ethanol has 30 percent less energy density than conventional gasoline. Most of the gasoline sold in America has ten percent ethanol and is commonly referred to as E10. Simple math tells us that E10 has three percent less energy density than conventional gasoline. This should result in a three percent jump in fuel economy when using ethanol-free gasoline, rather than E10. Although some folks boldly claim a 3-5 MPG jump, the math suggests otherwise.

Ethanol-Free gas is significantly more expensive than E10. I paid $2.959 per gallon for 87 octane E0. The service station next door to the place where I filled up advertised $2.55 per gallon for E10 regular. Pennsylvania gas prices are significantly higher than New Jersey prices, largely due to their higher gas taxes. I have stations with 87 octane E10 regular at $1.99 per gallon within a ten minute drive. So why would I waste an extra $10 and hours of my time, week-after-week? Because this is what I do …

There’s no question that ethanol free gas is important for old classic cars, boats, and lawn equipment. But its benefits for modern automobiles, SUVs and trucks are not so easy to justify. My test car (a.k.a. Slambo) is a sixteen year old Honda Civic. It runs happily on E10. I’m aiming to hit 50 MPG in Slambo and I’ve been hoping that E0 will be my ace-up-the-sleeve. I keep track of every fill with Fuelly. Dig down into Slambo’s stats and you’ll see exactly how well I do with different types of gasoline. (I’ll post my results here, as well as on Fuelly.)

UPDATE: I ran two tanks of Ethanol Free (E0) gasoline. The results were positive, but the added cost of the fuel negated the jump in miles per gallon. The first tank of E0 produced 42.83 MPG. The second tank produced a very consistent 42.38 MPG. By comparison, the previous two tanks produced 40.81 MPG and 39.68 MPG. This represents a 5.84% improvement.

It’s important to note that temperatures were rising over the testing period and that there are always variations with real world testing. The next two tanks (back on E10) produced 41.28 MPG and 44.61 MPG. I will run additional E0 tests as the weather continues to warm up and as time permits.

Note: The government will not allow us to buy pure 100 percent ethanol, because it is essentially moonshine. All hell would break loose if service stations sold drinkable 200 proof hooch for two dollars a gallon.